The island of Vir is one of 300 islands and islets of the Zadar archipelago, one of 1186 islands and islets in the Croatian Adriatic. Passed in the Sea of Vir in the north part of Dalmatia. Twentieth in size among angleški islands, and eighth in the Zadar archipelago. Continues to Privlački peninsula from which it asunder 3m deep and 300m wide Privlački Draft. From the island of Pag in the north-east is divided by a channel 0.7 nautical miles of New Povljane. Vir Zadar is 26 km away, and by sea (to port), about 15 miles away. The land is connected via Privlački draft port bridge since 1976. The Vir thus become an integral part of the land. The eastern part of Gaza, situated Školjić island, covered with pine forests and long sandy beach, which makes the uniqueness. Islet until recently was connected with the way Virom during low tide was an integral part.
From north to south, west and is surrounded by islands: Pag, Maun, Planikom, Olib, same, Molat, Sestrunj Rivnjom and Ugljan. It has an area 22.38 kilometers, the length of 10.12 kilometers and maximum width of 4.25 kilometers. The coast line is 31,43 km long. Because of the favorable depth in the Sea of Vir, Vir lead to important maritime routes to Rijeka, Italy, south of Zadar and Croatian. Because of these sea routes in the western part of the lighthouse was built. New Povljane through the channel for larger, and the Draft for smaller boats, the sea-route through Nin and Ljubački Ljubačka bay and doors (Forticu) in the Velebit Channel.

Recommendation: do not leave valuables in the cars, do not carry them to the beach, lock the accommodation units and close the windows before you leave, follow the traffic rules, especially in smaller towns and drive cautiously when it rains.

At the beginning of the 16th Ninskom century to the Turks appear. At that time this area the government Venice. The Turks almost 200 years creating conflict zone. Nin was destroyed 1502.god. In Venice, discussed whether destroyed Nin restore or build a new fort on the island of Vir. Viru is located on the objects, each of which has its own special historical and cultural dimension of special importance for the island:
St John the Baptist dates from the time 13./14. century. This Romanesque sacral building is rectangular with a semicircular apse. Earlier, before the construction of the present parish church of St. George, she served as the parish church. Around this church was built a cemetery so that it is now used as a cemetery church. Restoration and protection of the Church of St.. John the Baptist, under the professional supervision of the Institute for the Protection of Cultural Monuments, was carried out in the period since 1996. to 1998. , when added over the front and the so-called horsetail with a bell.
One of the most famous sights of the island of Vir is a Venetian fortress Kaštelina located in an area called Kozjak. This fortified building was apparently built in the early 17th century. Venetian authorities he built to protect the population and the Vira Nin end of uskoka and attack the Turks, who at the time are advancing towards the area. Part of the fortification building has been preserved to this day. Kašteline preserved on the front arms of the Venetian family of general governor for Dalmatia, which they manage this area at this time. On the northern part of the tower is damaged winged lion, symbol of Venice. Reconstruction of the works carried out in the period from May 2001. until April 2002. year.
The parish church of St. George was built in 1845. on the foundations of older church bearing the same name which, according to estimates, dating from the period around 12 or 13 century. This church has a single nave building with a rectangular sacristy, which is on its tail. Beside the church is located a stone tower that was built in 1937-38. year. Top of the bell tower was destroyed in World War II by German occupation forces and, after the war, renewed 1959th year.
Vir lighthouse was built 1881st year on the southwest coast of the island of Vir. This is a typical example of the great lighthouse lighthouses that were in the 19 century, built on the eastern Adriatic coast and is one of 50 similar lighthouses that were built during this period. Until recent times and the automation of the lighthouse, he had a crew, or with the families of lighthouse keepers lived on it and perform their daily tasks to the lighthouse to function flawlessly. During the Second World War, this lighthouse as its base the anti-fascist fighters, who had maintained a connection between the partisan units in the mainland and the island Molat. The lighthouse was destroyed in retaliation was 1944th year by the German occupying forces. It was restored after the war and again put into operation 1950th year.
The Bridge is certainly one of the most important facility for the development of the island of Vir. Vira connectivity with the mainland lost the dependence on shipping lines and greatly improve communication links with the rest of the world. The communication link directly influenced the direction of further development of Vir. Virskog bridge construction began in 1974. year, while turnover was released 24th travnja 1976th year. This is the arch bridge 378 meters long, which rests on nine concrete structural columns and two additional dams in the end of the bridge. This is one of the longest bridges of its kind built by us at that time.

Duboka Draga - the most beautiful beaches in the Viru, crystal clear waters, outside any settlement (in the northwest of the island), possible access to boat or yacht. Unspoiled nature, combined with the red rocks and šodrano-sand beach will surely delight you.
Biskupljača - beach and harbor for boats, sand in the sea, outside beach + paved stone and gravel
Velika Slatina - Natural beach, the sea sand and pebbles out
Mala Slatina - governed by 300 meters beach avenue, benches, seabed sand and stone, close to the pizzerias, coffee bars and bistros
Lučica - the old port for boats, decorated and surrounded by beaches. Seabed partly rocky and partly sandy, avenue, benches, concrete (outside), sports facilities (scooters, pedal). Coffee bar, disco club, bistro, shops and taverns on the beach in the immediate vicinity.
Žitna uvala - sandy seabed, outside šoder and concrete. Nearby there are a coffee bar and pizzeria.
G. Prezida - sandy seabed, outside šoder and concrete, a lot of apartments, a playground for children and youth.
D. Prezida - jeskovito shallow water, outdoor beach: šoder - concrete. Lots of apartments, catering facilities: pizza, restaurant.
Miljkovic - partly sandy and partly rocky seabed, outside pebbles. Beach is interesting because of the proximity to the large number of apartments.
Marina Luka - rocky beach with a concrete path. Close to cafe bars and shops. On the beach you can rent a scooter. The beach is a marina for small boats.
Radovanić - Sand and stone beach, is surrounded by a concrete path, a nice promenade and lined with benches, piers, car-camp. On the beach there is a coffee bar and a pizzeria and sports facilities and Lunapark.
Jadro - gravel on shore, the sand of the sea, pedal boats, water skiing, and let. chairs, ideal for picigin. Near the main marina (departure on an excursion boat in the waters of Zadar), patisseries, pizzerias, coffee bar and a new entertainment center.
Kozjak - pebble beach, the sea sand, half of the beach during the day in the sun and half in the shade, close to the works Kašteline, on the southern side of the beach, enclosed by Cape Kozjak. The beach is characterized by the stone which is like Brusa.
Sapavac - grassy and sandy terrain, sandy beach, peloidno mud on the beach (treated rheumatic disease). Pine forest which provides excellent shade and a beautiful view (located near the historic Tower Kaštelina). The bay is located on the south side of the island and is situated so that it is protected from the wind (wind, south). The beach is suitable for going on trips (Nin, Zadar, Dugi Otok, Kornati ...).
Bay Pedinka - pebble beach, the sea sand, with suitable anchoring of yachts and speedboats, and the shade of a pine forest.
Meka - completely natural beach away from any village, clear water and peace, rock coast. Suitable for the arrival of a boat or motor boat. 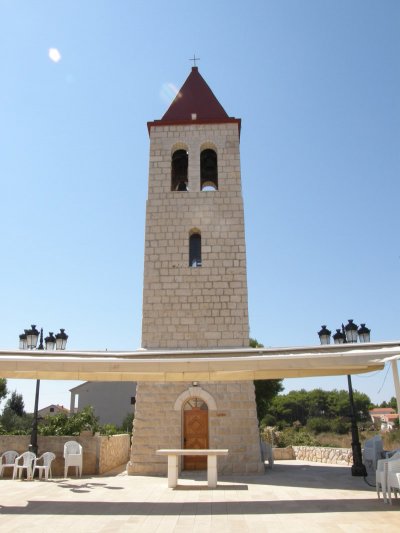 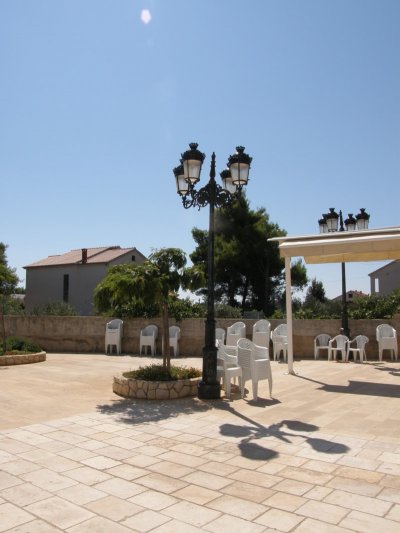 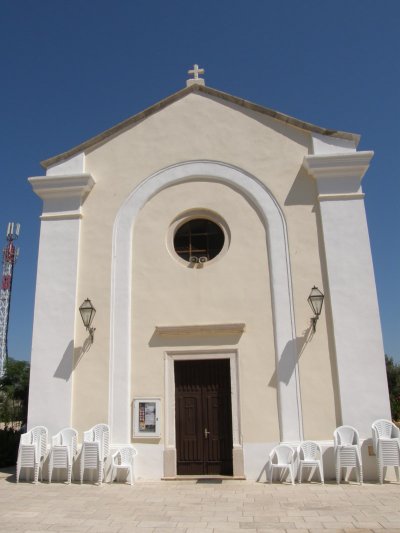 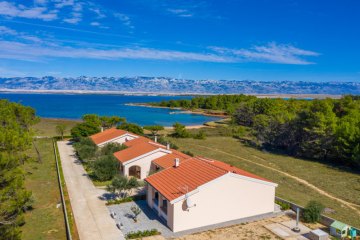 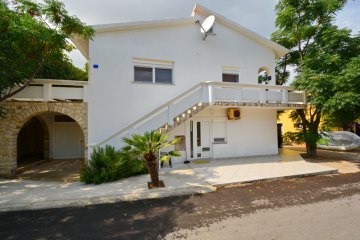